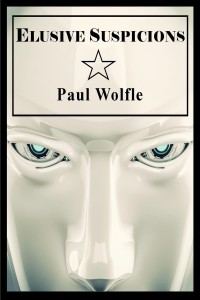 Having Jack Brewster sing “Policebot Blues” seemed like a natural fit, especially after watching From Here to Eternity for the umpteenth time. That one particular scene in the legendary 1953 movie, where real life country artist and innovator Merle Travis picks and sings “Reenlistment Blues,” in the character of a GI, has always been a personal favorite. Travis’s acoustic toe-tapper has the kind of gusto and musicianship that is hard to forget. Director Fred Zinneman nailed it with Travis and his “Reenlistment Blues.”

There is no doubt Merle Travis’s appearance in the famous film inspired Jack Brewster’s “Policebot Blues,” from the newly published, Elusive Suspicions. The late singer had the kind of stuff American Idol contestants must dream about. On the big screen, Travis performs among a small group of fellow soldiers; in the book, Jack Brewster, 15, has no audience. Brewster has the blues but for different reasons. Jack’s troubles involve a police captain named Pete Harmony and his tele-robotic minions, called policebots.

Jack is a growing film buff, and while the story takes place sometime in the future, it’s feasible for him to have seen From Here to Eternity. Though he’s not ready for Simon Cowell, Jack also plays guitar. When you put everything together, a song like “Policebot Blues,” seems inevitable. When Jack was feeling unhappy, he grabbed his six-string and started to play. Out popped “Policebot Blues.”

But Elusive Suspicions is about much more than just p’bots and a song. Set in a small town named Maplefield, sometimes things are not as simple as what they seem. Family relationships are pulled in different directions and uncertainties linger as Jack Brewster is pressured by the authorities for his cooperation. Short in length, but no less suspenseful, policing has never looked like this. It’s a whole new world in Elusive Suspicions. Read it now.

Paul Wolfle is an independent author and the publisher of musicinterviewmagazine.com.