Sunday In The Cave With George: Early Pixels and Pointillists 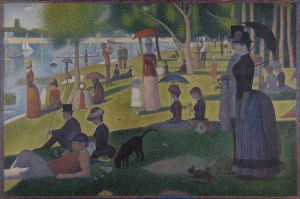 Move over Georges Seurat. Archaeologists have discovered more than a dozen 38,000 year-old rock engravings in France that contain images constructed from small dots. That’s right. Tiny points blend into specific recognizable shapes, including an ancient mammoth. As it turns out, Impressionist painters were not the first Europeans using pointillism to communicate ideas. It seems the carved designs, located in 2012, have modern parallels. In fact, some experts have described the pictures as pixelated.

Unearthed during an excavation in the Vézère Valley, though radiocarbon dated, the precise age of the 16 limestone blocks still has not been pinned down completely, leaving questions about whether or not these 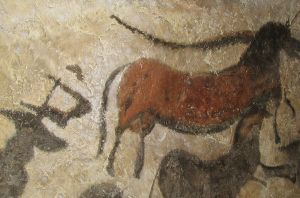 definitely are the world’s oldest pictures. By comparison, some Indonesian cave artwork dates back about 40,000 years. What’s more, the drawings at the famous Lascaux caves are approximately 17, 000 years old. The Indonesian art actually is stencil work, while Lascaux was painted freehand. But neither employs pixels.

As for the graphic representations on the Stone Age slabs, Professor Randall White, an anthropologist with New York University, suggests the technique is “almost digital in its nature.” He’s talking about pixels, dots of light that form the images on television and computer video screens, which are similar to the small round marks made by the Upper Paleolithic tool tradition in the Vézère Valley. Though the ancients lacked digital connections, the broader principle is the same. Findings of the discovery were published in the journal Quaternary International.

Where Georges Seurat, Paul Signac, Henri-Edmond Cross, Vincent Van Gogh and other pointillist pioneers of the 19th century were inspired by aesthetic musings, it is not clear why antediluvian artisans used a similar, almost contemporary approach. Meanwhile, reading about the archaeological find raised some questions about the pointillists. Seurat has always been a personal favorite. Did the master painter conceive of his new procedure by tapping into some dormant but once resourceful vestige, the kind that inspired the discoveries at Vézère? All things considered, Seurat’s A Sunday Afternoon On The Island Of La Grande Jatte could have been painted by someone who was a simple caveman at heart. Scientists have not mentioned if the stone cuts were signed.

Paul Wolfle has a B.A. in Geography from Hofstra University (m. Art History); and an ARM (Risk Management) insurance certification.